Finish it up Friday - the Penny Patch edition!

So it looks like at least one of my little guys will be getting his birthday quilt on his birthday this year!
That's right! I finished Max's Penny Patch! 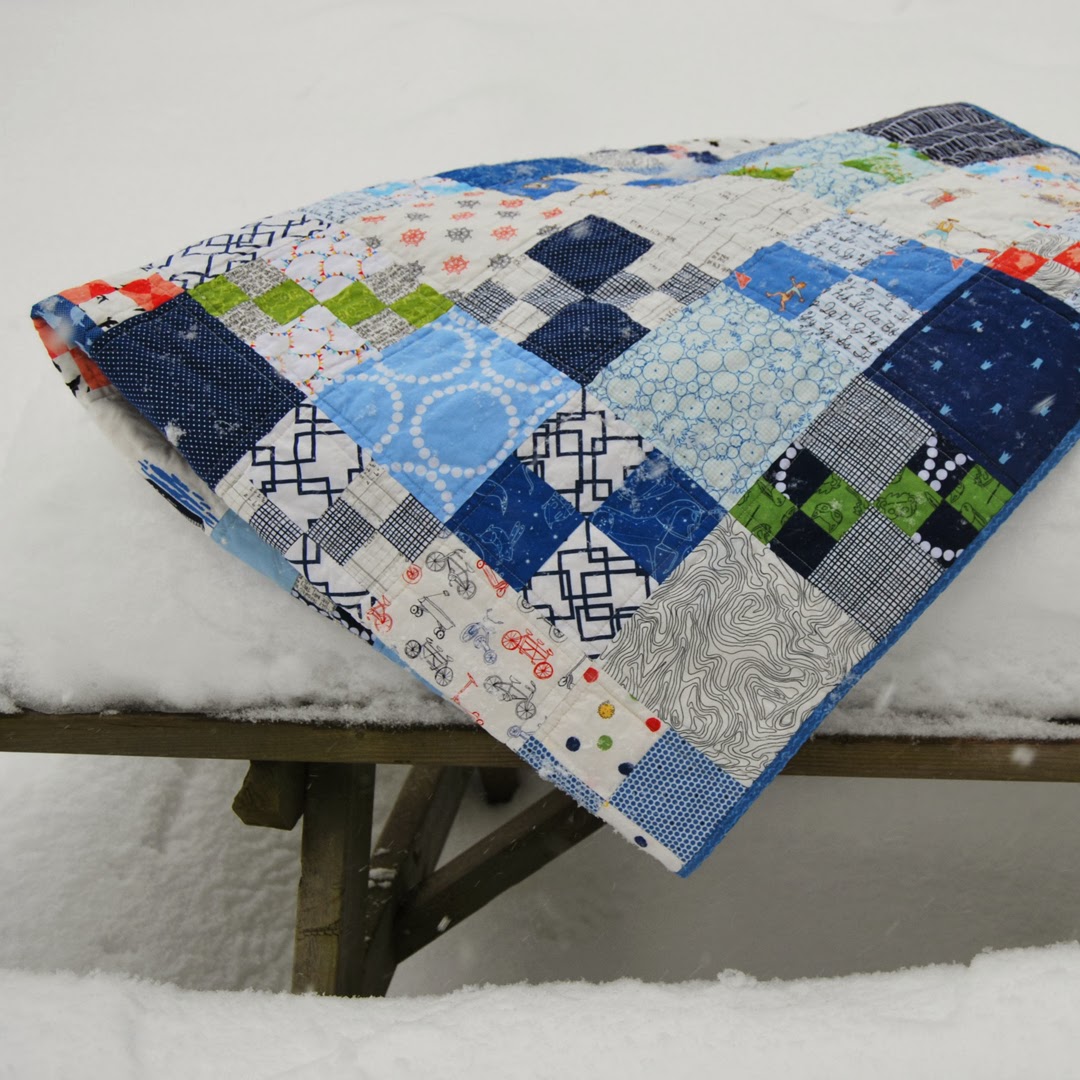 I've loved the Penny Patch since first making it for my Penny Sampler, so when Rachel from Stitched in Color announced that she was going to do a Penny Patch QAL i knew that this was the quilt i wanted to make Max!

So with my fabrics already picked, 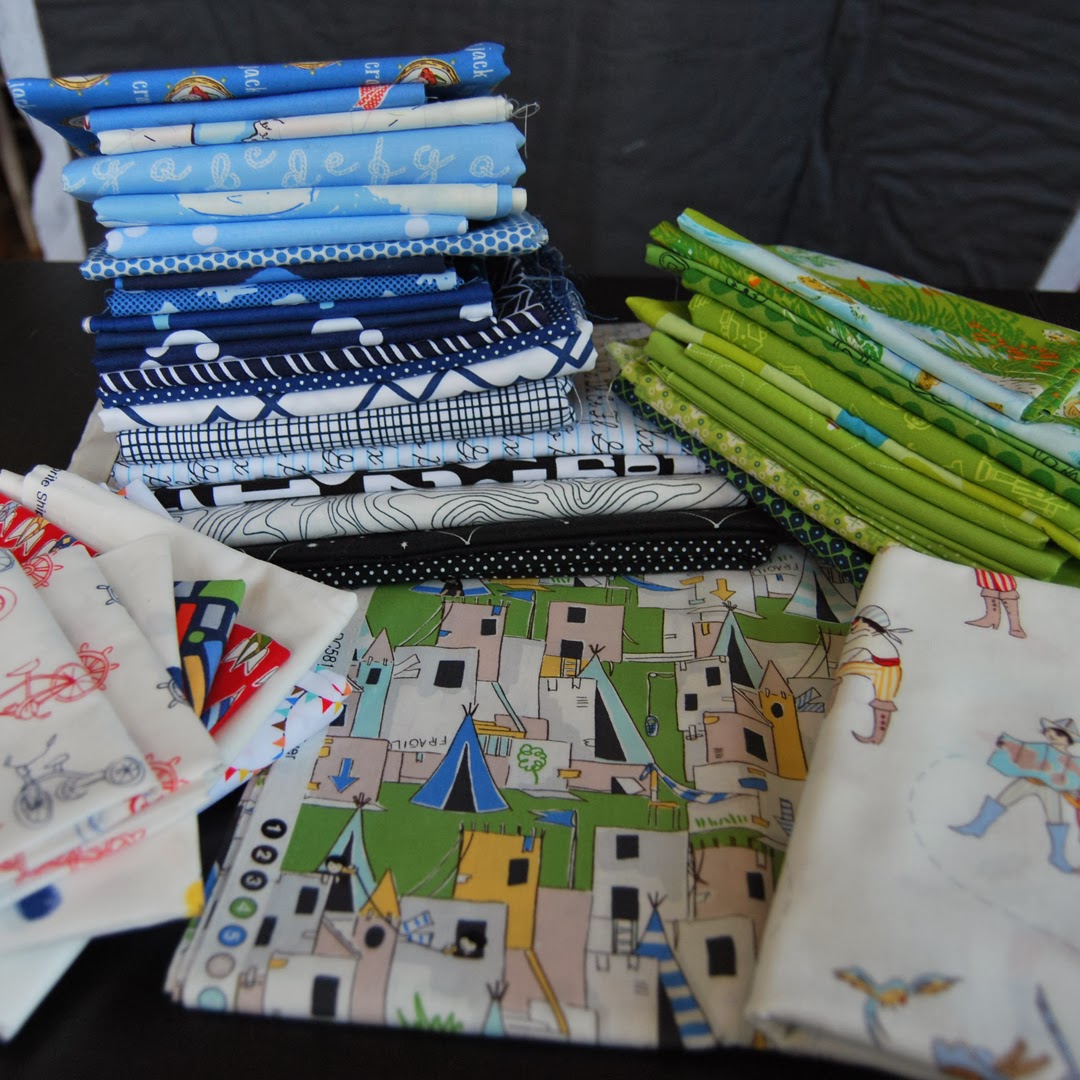 I set about cutting and sewing and sewing and cutting. And thought i was doing really great with my time. So when the Christmas holidays rolled around i set it aside knowing that i would be able to finish it with plenty of time for his birthday. After pulling it all out again this month it turns out i wasn't nearly as far along as i remembered.

That being said this one came together so easily that i managed to take it all from this stack, 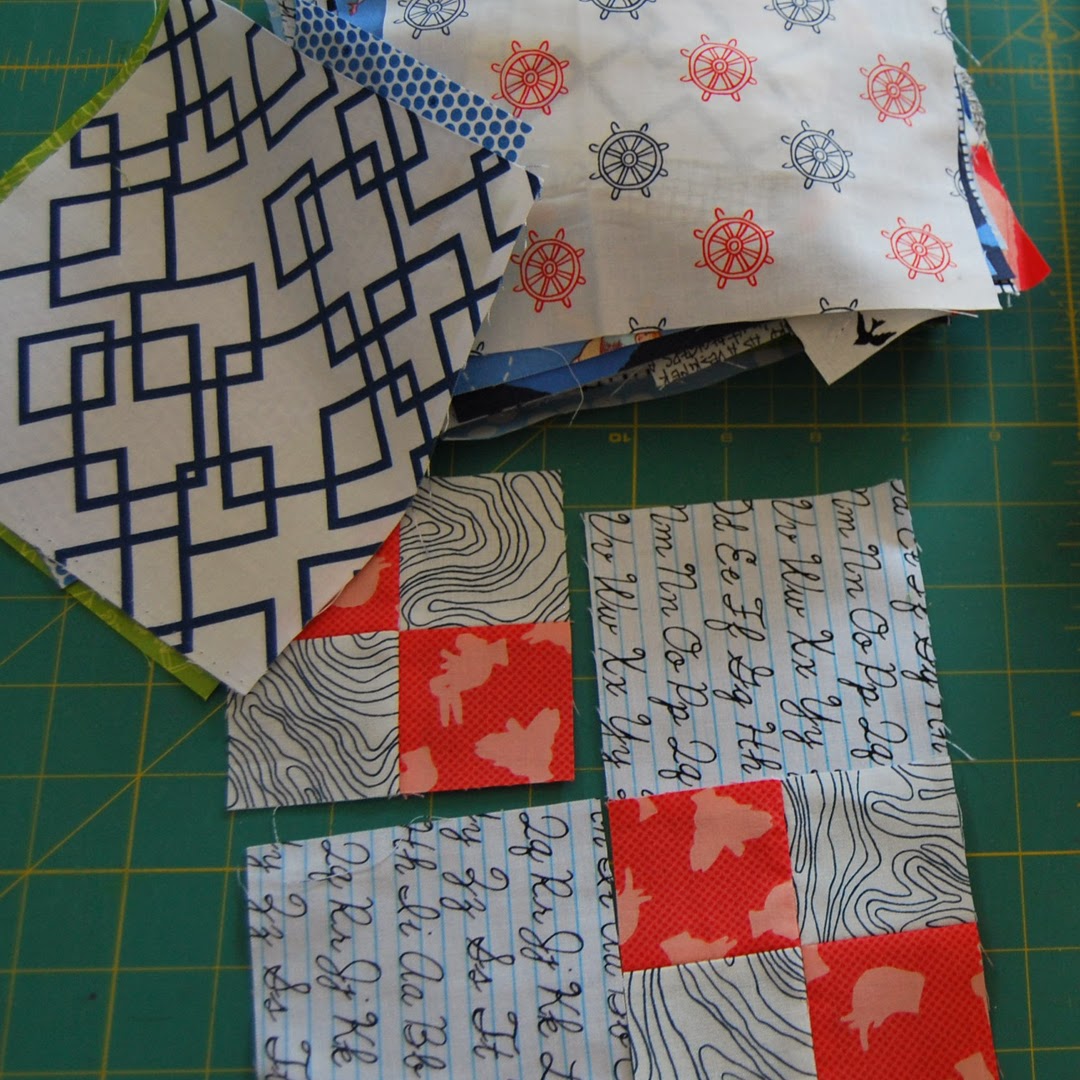 To a fully finished top in just a day and a bit. And that included making about twenty or so more of the little penny patch blocks than i originally started with. 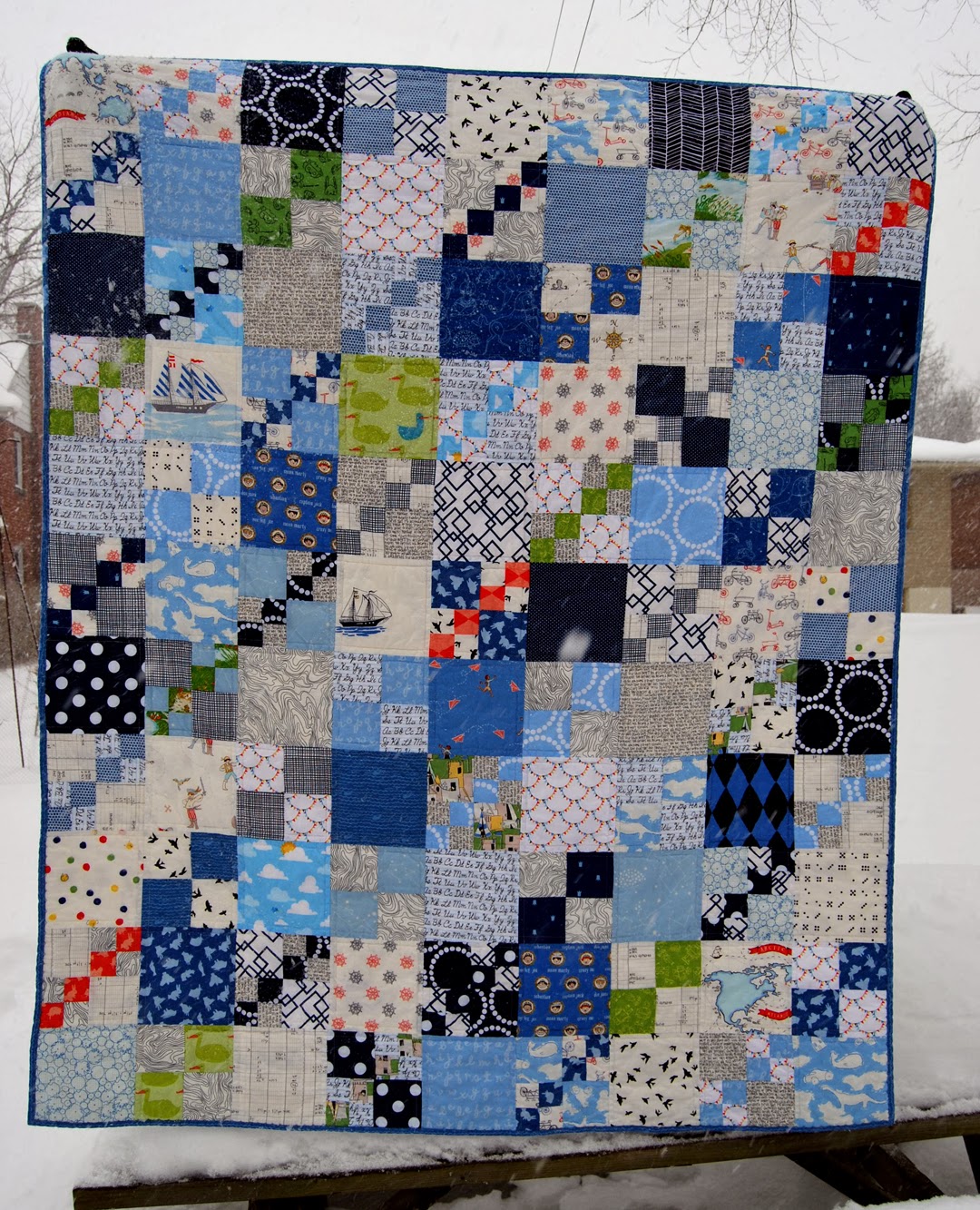 I wanted it to read as primarily blue, while still having a bit of green to match Sammy's quilt (someday i'll get it finished!) And i think i successfully pulled it off, especially compared to the original layout. 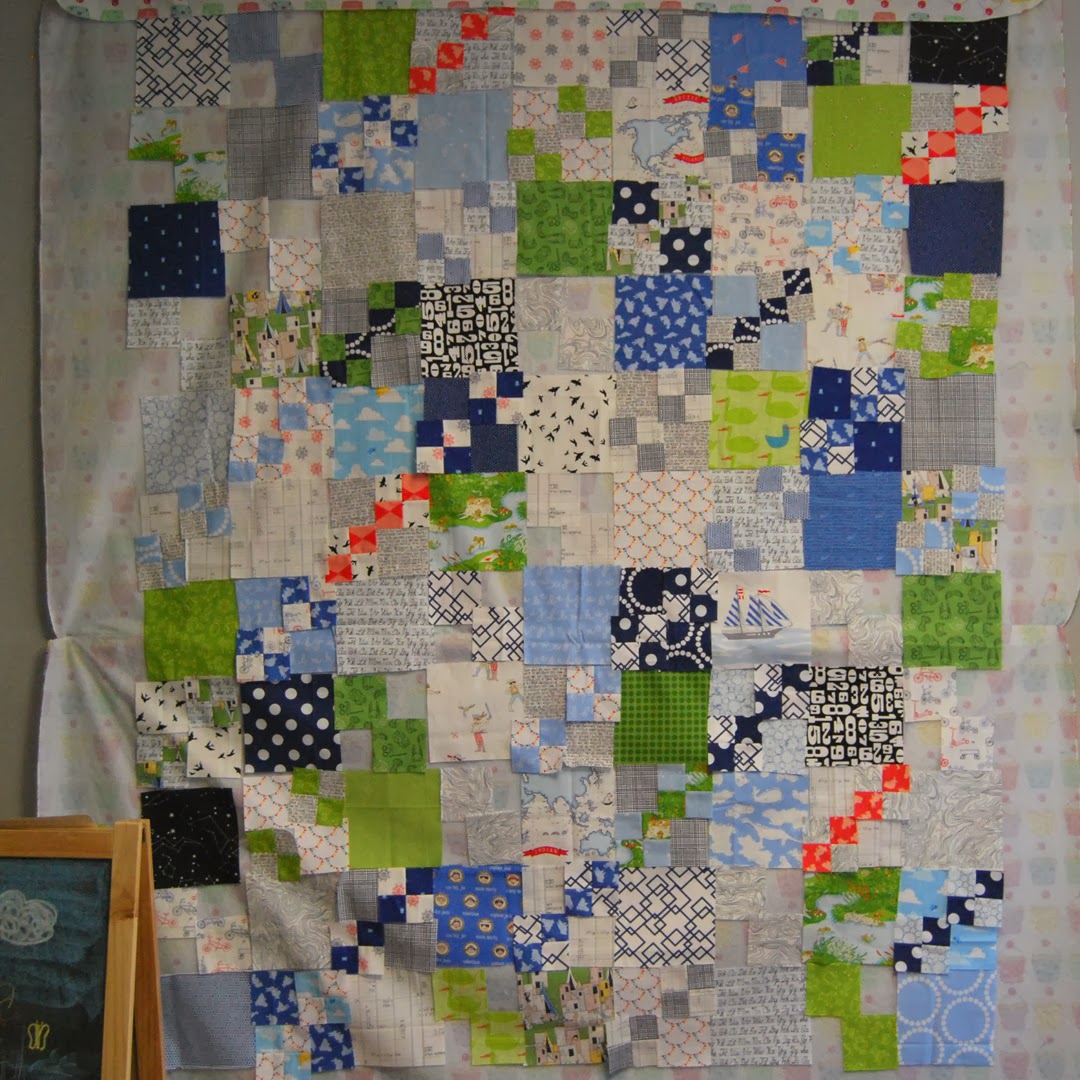 My OCD is still a bit twitchy with a few of the blocks (three to be exact), but in the grand scheme of things i don't think it really matters. Especially to my two year old, who already is super excited that this is his!

I kept the quilting pretty simple with this one, just a quarter inchish outside each seam in both directions. I considered going diagonal as well, but i'm glad i stopped with just two directions. I think the quilt itself already has quite a lot going on without all kinds of quilting. That and i'm lazy. Yeah that's right, i said it, i'm a lazy quilter. But is there any better feeling than the one that comes with quilted intersections that aren't puckered all to crap?! Look at these intersections!! Go ahead, click to zoom in! 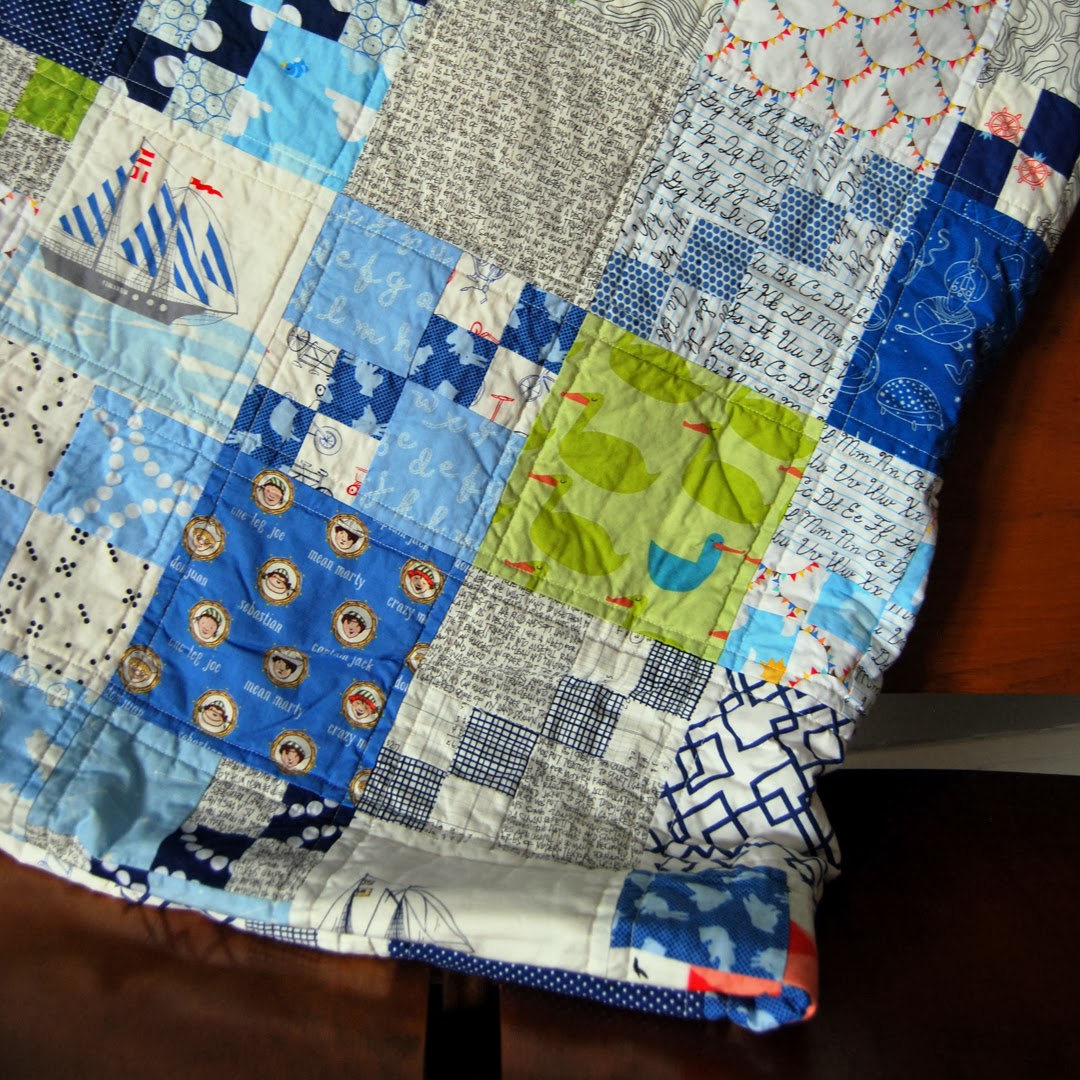 Awesome! I may be a tad excited about this, but in my defense, for the longest time i would only quilt one direction just to avoid the evil pucker ;)

I opted to machine bind this one for durability. I used a cute wave print from my stash and discovered that my machine has a wave stitch that i though i'd try! 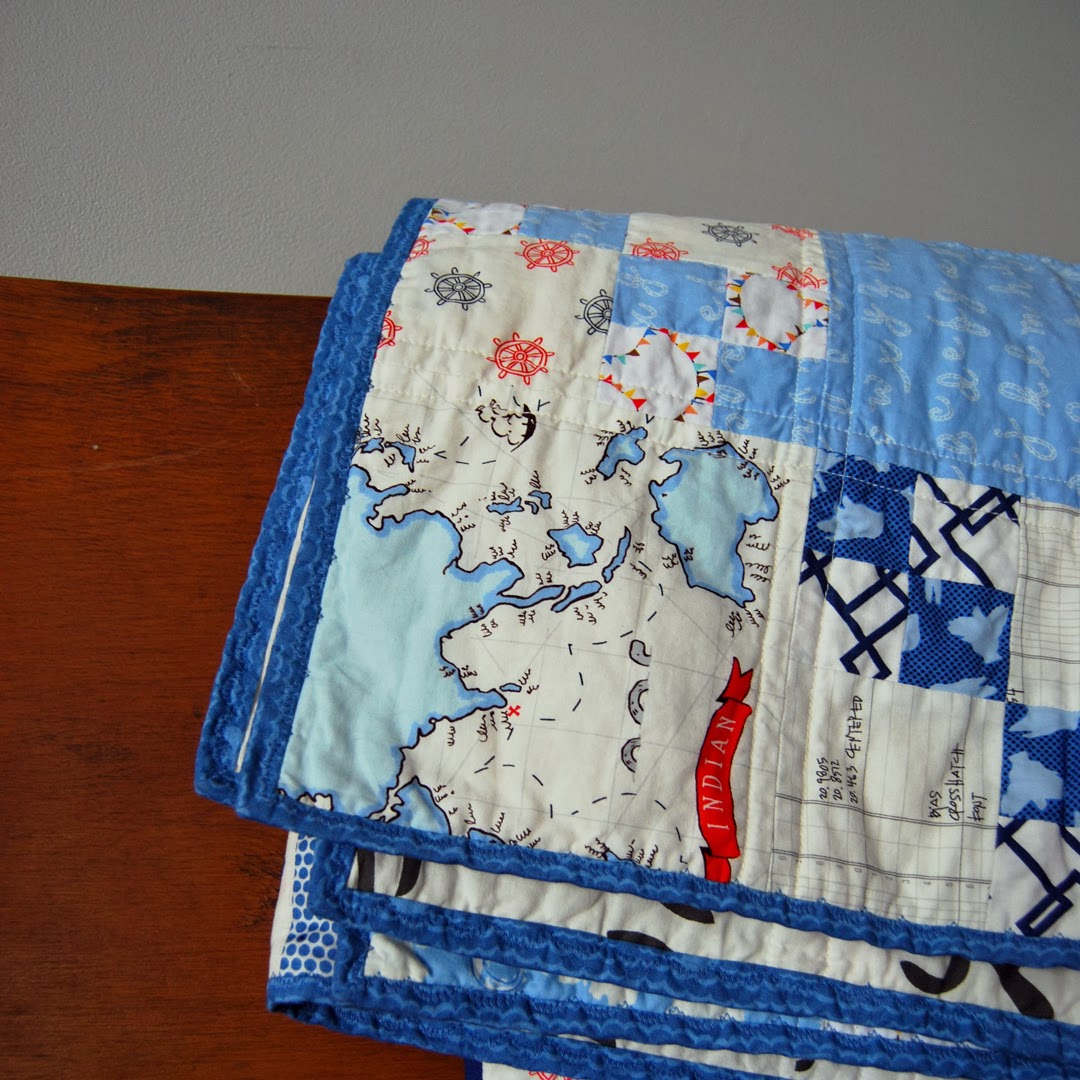 I'm not overly thrilled with the result but the thread i chose was the exact same blue and you can't really see it. I'm not big on machine stitched bindings but i love the speed of it and again the durability factor. I guess i just need more practice!

I've used the ever popular Ikea Britten Nummer print for the back. A first for me and i will be using it again. Really people, 59 inches wide = no piecing for the back, and only 4 dollars a metre = more money to spend on pretty fabrics! 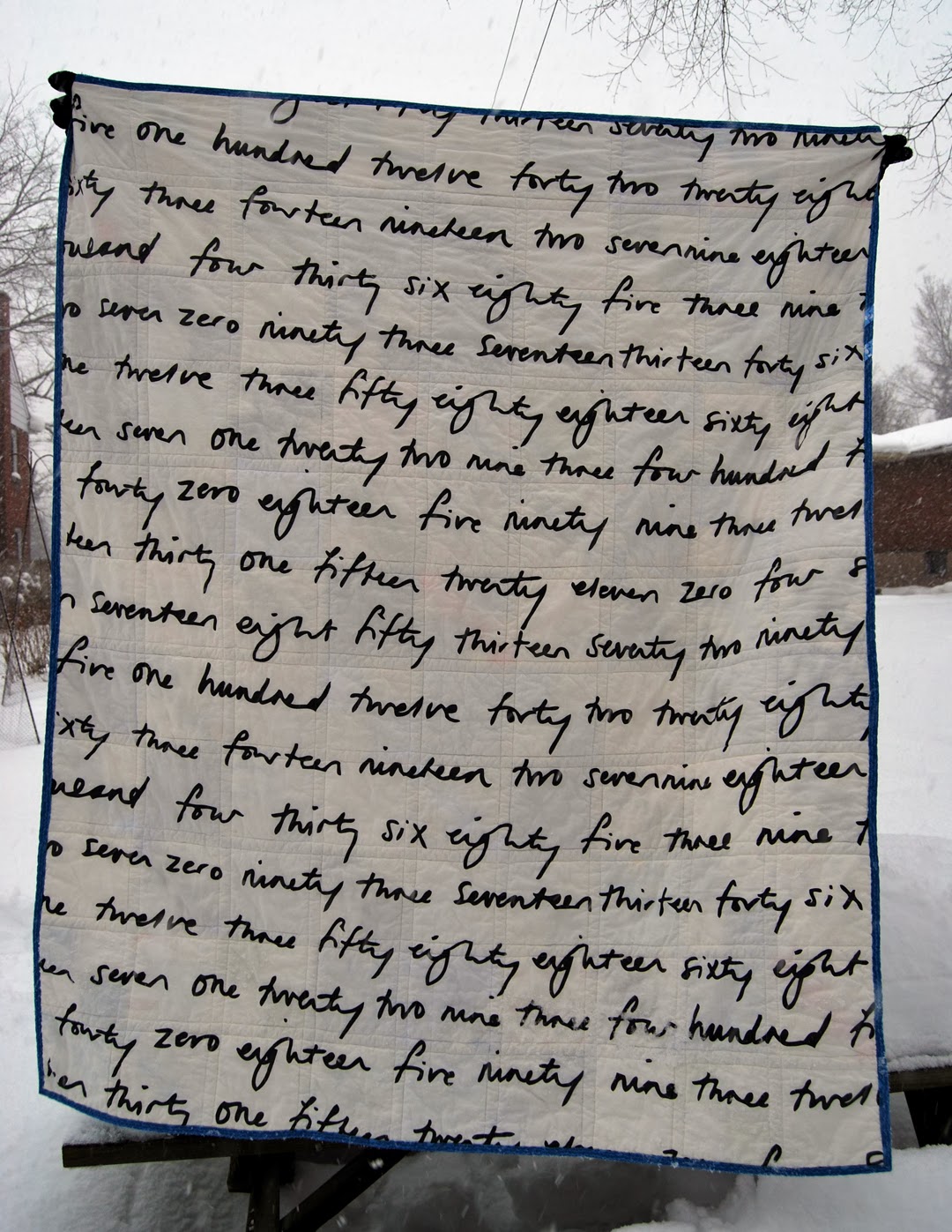 And it also speaks to the font nerd in me! 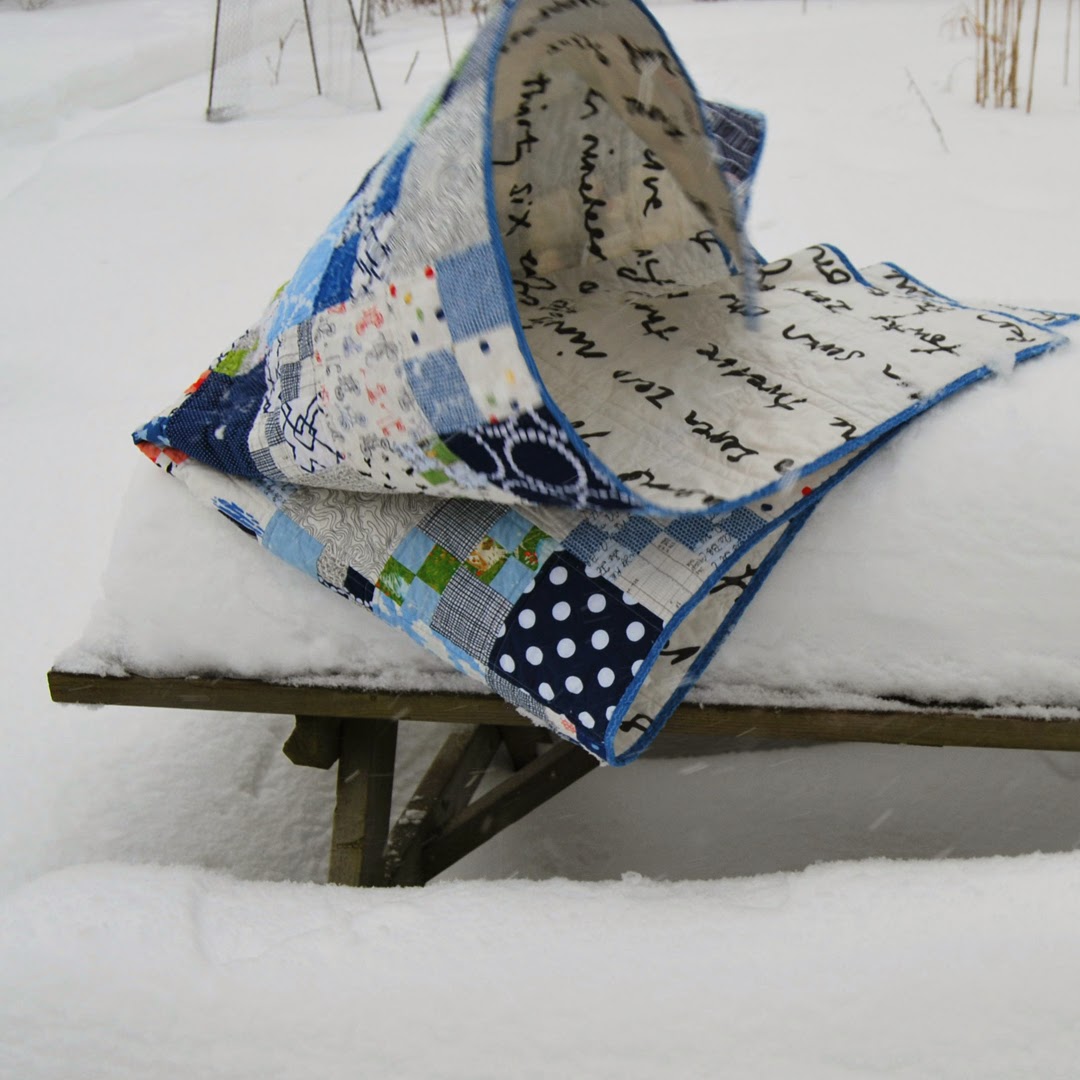 Again with this one i had grand photo plans. That were promptly thwarted by our lovely Canadian weather. Can we not get a bit of spring here?!! Please! So again with the backyard picnic table shots, sorry. 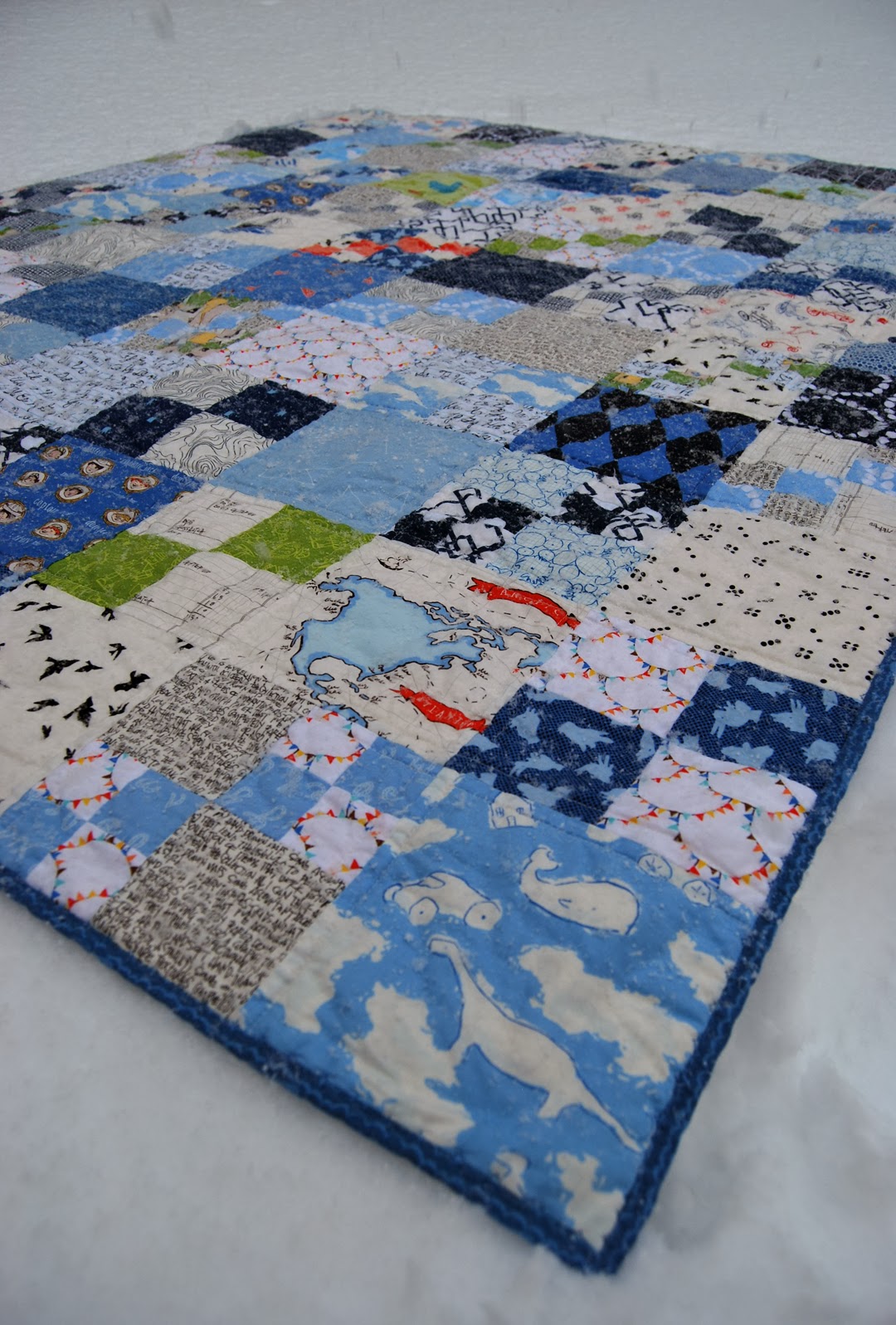 The Stats:
Finished size after quilting, washing and drying - 53x65 ( i forgot to take the prewash measurments)
Pattern - Penny Patch by Rachel of Stitched in Color
Fabrics - too many to name, but mostly Sarah Jane's Out to Sea, Children at Play, and Let's Pretend.
Lizzy House Constellations, Red Letter Day and of course Pearl Bracelets (it's never a proper quilt without Lizzy House) Some Architextures, Waterfront Park, i could keep going. Let me know if there's a print you want to know and i'll try my best to get the details ;)
Quilting - simple straight lines, quarter inchish both sides of all seams, by me on my little old Ken.
This one also knocks out another on my finish along list!

That's it for me for today! I'm still plugging away on my Gypsy Wife blocks (just fussy cut the 25 center squares i need for the square in square blocks, stay tuned for those! Or follow me on Instagram for all the early bird shots - @snippets101 !!)
Linking up with Amanda Jean for Finish it up Friday!