Finish it up Friday - the Swoon mistake.

So yesterday i discovered the downfall of finishing up a project that was started over a year ago. When i started my Washi Swoon quilt i cut all the fabrics i needed for the blocks but neglected to cut the sashing, thinking, (okay probably thinking, because really people it was a year ago, i'm lucky if i can remember last week...) thinking, that i would cut the sashing when i needed it, you know a week or two later.

Fast forward, and i have no idea what so ever of which white i used! So i pull out my stash of whites and come to the conclusion that i was using Kona PFD. Perfect! I had just recently picked up another few yards to use on my Indian Summer quilt. So i cut my 6 two and a half inch by twenty four inch strips and stitched the first one on... And it looks like i wasn't using Kona PFD after all, dang! 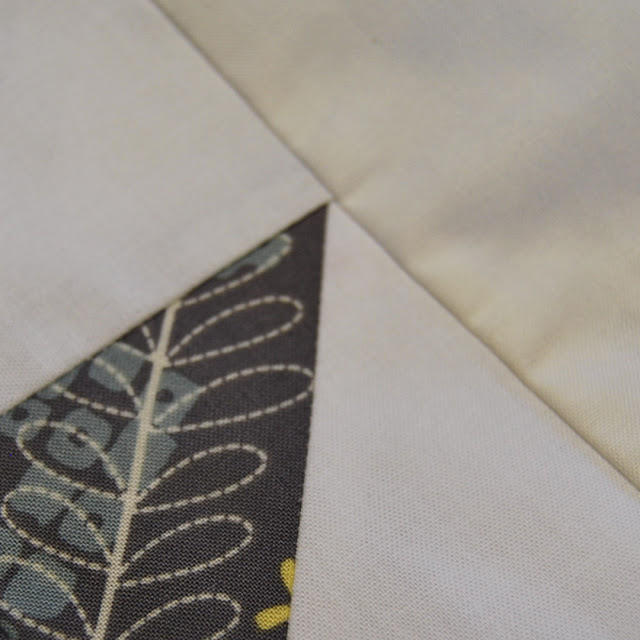 You can obviously tell that the creamier white on the upper right is the Kona PFD. So, out comes the stash and after what seems like forever i come to the conclusion that what i was actually using was plain old Kona White. And with not enough of it in my stash a trip to my LQS is in order. Upon arriving i pulled out the bolt of Kona White, put it on the counter with the one Washi Swoon block i brought with me, and both the girl working and i agreed it was indeed Kona White, so i bought a whack of it, you never can tell when you might need it! So this morning i cut out the six strips i needed and got the whole thing stitched together! Then took it outside for it's picture... to discover that in natural light, (i unfortunately have florescent lights in my kitchen, they came with the house, and i haven't gotten around to painting and installing the amazing vintage light fixture i bought when we first moved in four and a half years ago, i really should get on that now that i'm thinking about it... hmmm.) where was i?, oh right, i took it outside and low and behold it wasn't Kona White i used. (insert all manner of curse words here!)

But the bright side is, while it's not the white i had used in the blocks, (still have no idea what it was) it's a perfect match to the white in the Stella Dots i used! So my own personal opinion is that it looks fine and i don't need to take it all apart! Whew! 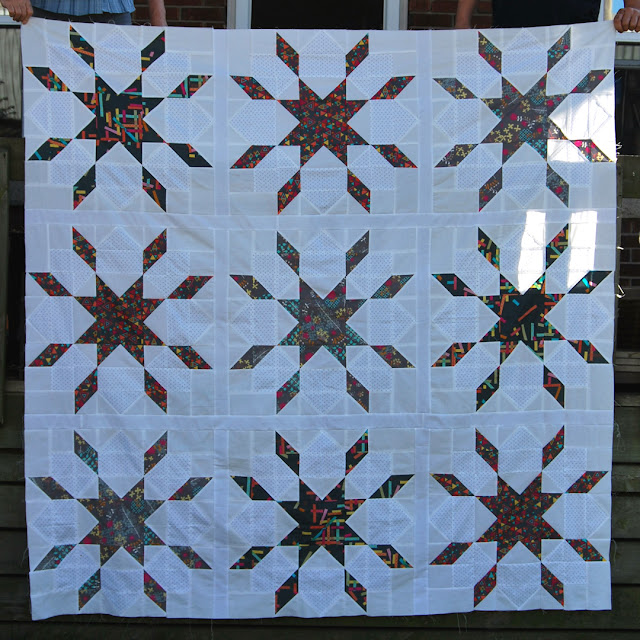 Now, i have yet to add the borders around the outside, mainly because i'm not sure what i want to do, but also because my kidlets have been playing percussion with the pots and pans all day and i have a monster headache, tomorrow is soon enough! But i'm kind of thinking, two and a half inches of white, then two and a half inches of the washi print, another two and a half of white and then the washi as binding, maybe not? Then i started wondering about all the hst's i have left from making the blocks. As i was sewing everything together, instead of just cutting off the excess after making the flying geese i marked off a half inch into what would be waste and stitched, then cut down the middle, yielding the block that i need as well as two hst's that would normally be scraps! And here they are! 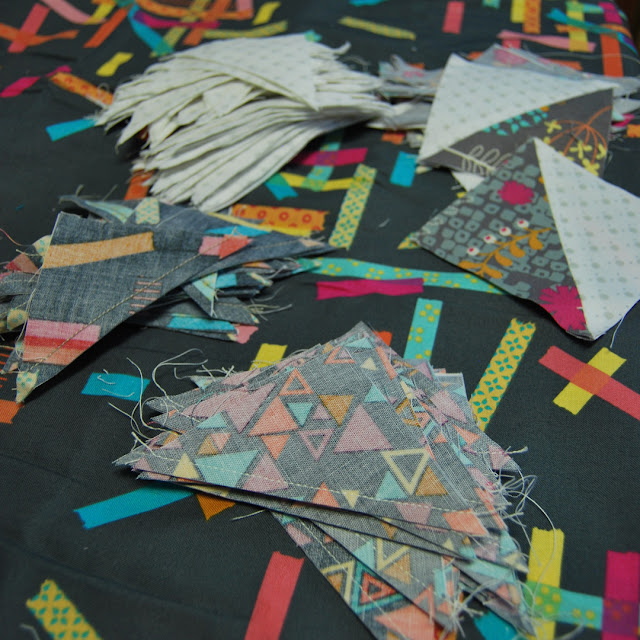 Of course i haven't yet got around to pressing and squaring, but what do you think, should i somehow incorporate them into the border, backing, matching pillows? They will square up to 3.5 inches and i have about 70 of white with Stella Dots and about 70 of the other prints. Which would give me enough to make it around the whole quilt with some to spare, but would it look okay? I think i'm maybe too tired to be making any decisions, feel free to leave your ideas though! And i'll leave you with this shot of my newest creation... 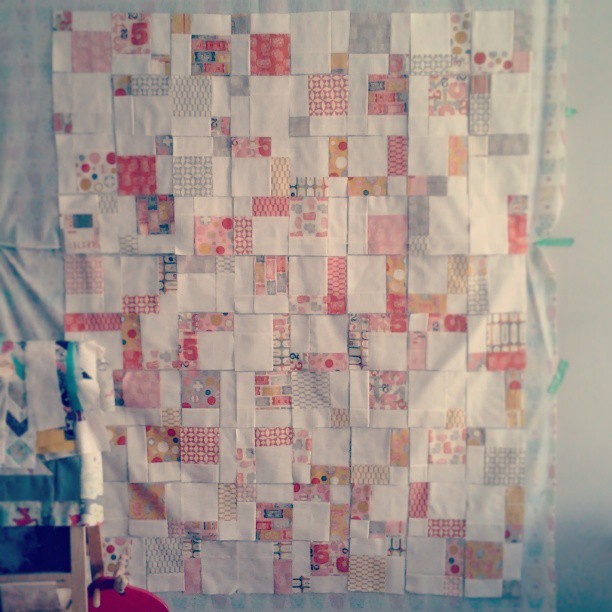 My modern D9P using two charm packs of 2wenty Thr3e and Kona PFD... (keeping tabs on my whites from this point on!) Hoping to get this one stitched up this weekend!

Linking up for Finish it up Friday with Amanda Jean!
And another over at Kelly's for her Needle and Thread Thursday!
Posted by nicole at 10:39 PM