So it would seem that my time is being wasted on bucket hats. I finished off the remaining four today and was rewarded with this. 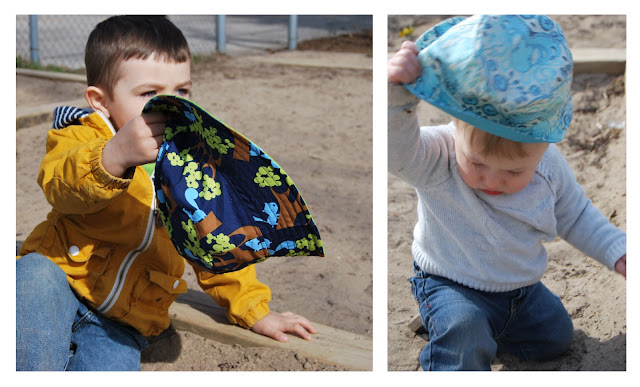 Sammy loves his straw hats and wanted nothing to do with the buckets that were made for him, and Max is still not wanting to wear hats in general. That being said, this one i made for Max went horribly wrong. I have no idea what happened but it somehow ended up being too small. I used the same pattern pieces, and cut the fabric out at the same time as the plaid one but this one seems to fit totally different. Is it possible that Max's head grew significantly larger overnight? Or maybe my cutting wasn't as accurate as i thought? I'm thinking it was probably the later. 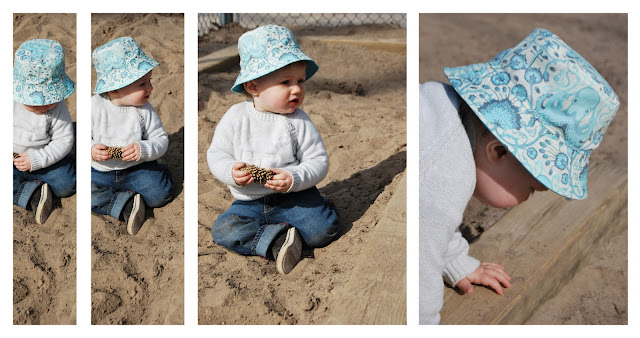 These are the only shots he would let me take and despite the smile on his face he was not happy. So there was no way he was going to let me flip the hats inside out to get shots of their reverse sides. So the hat on the left is solid green on the reverse and the one on the right is lined with a green spotty print.

I'm still not entirely sure i was made for sewing kids clothes but i will continue on. Tomorrow was going to be spent drafting a pattern for pants for Sam and getting them made, but the boys won't be going to my MIL's like the usually do on Wednesdays. So i think i will see if i can get Max's shirt sewn up. I'm also hoping to put in a bit of time on my log pyramids. We'll see.

Five high fives for five finished hats! (pictures of the fifth one coming at a later date)
xo snips