I had hoped to post this last night but between Sam being fussy, my complete lack of control lurking in others blogs and the results show for cough, cough, soyouthinkyoucandance, cough, I wasn’t able to. Oh well, better late than never.

So the root of the strangeness I believe began on Wednesday. Sam turned six months (yeah!!) and had his six month check up.
The stats first... His length - 25.5 inches.
This puts him in the 10th percentile.
His head circumference - 17 inches. 25th percentile.
And lastly his weight... are you ready... okay before I give his weight lets take a look at a recent snapshot of Sam. 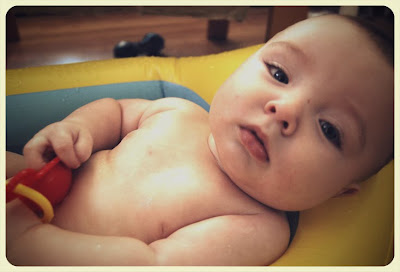 Yeah he’s a little chubby, but babies are supposed to be chubby. Would you want a scrawny baby? Babies are cuter when they’re chubby, and healthier too.

Okay, okay, his weight...
drrrrrrrrrrr...(drum roll for effect)...
19.6 lbs.
Which puts him in the 77th  percentile.
So he’s a little bigger than average...I like to think he’s playing catch up for being a preemie and is an overachiever.
Yeah, that’s it.
His doctor has assured us though that his weight is perfect, we don’t need to worry about it at all. But if one more person asks me what I’m feeding him or says “wow you’re a fat baby!”,
I might just snap.

All the rest of his test were great...developmentally he should be at a 4 and a half month old level...being a prem, (we go by his gestational age until he’s two instead of his actual birthday) but he’s hitting all his 6 month milestones...so he’s obviously a genius. That must come from my family...(I don’t know...lots?, the   door, what does Raid kill?...CARS!)(sorry inside jokes) anyhoo,
my fat chubby genius also had another round of needles.

One in each leg. 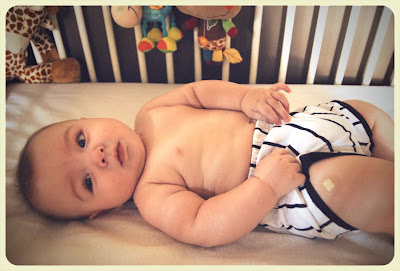 He did really well with them, I think it’s harder on me then him. I’m the one who has to hold him down while the doctor jabs him in the thighs.
He screams like he’s...

BEING STABBED WITH GIANT NEEDLES!!!

Then he cries, the kind of cry that says, “Mooooom, hu hu how could you let her dddo that to mu mu meeeeeee!!?”
A big hug from me, and a bit of a sway while singing on top of spaghetti and he’s fine. But i'm scarred for life.

So back to the strangeness, my thoughts are that the combination of our daily schedule getting messed up, the humidity and the shots made him a little off yesterday. His timing was off all day, he wouldn’t stop eating and he was very tired. (On a side note, why is it that babies fight so hard to stay awake when they are so miserably tired?) But despite all that I managed to fold and put away three baskets of laundry, clean out the freezer, swiffer the livingroom, dust the livingroom, and clean the bathroom. And by clean the bathroom I actually mean clean the bathroom. Not just the toilet. The floor got washed, and the sink. I cleaned the mirror and got rid of all the junk that had been slowly accumulating everywhere. I will admit though that I didn’t have time to do the tub and shower...maybe today.
I also managed to squeeze in 10 more origami cranes and printed off 13 more fonts.
( #’s 56 and 67 on my list)

And I still had loads if time to play with Sam!
Now that I think about it maybe it wasn’t Sam that allowed me to get so much done...maybe I somehow just managed my time better? Is that possible? And while we’re talking about chocolate chips... 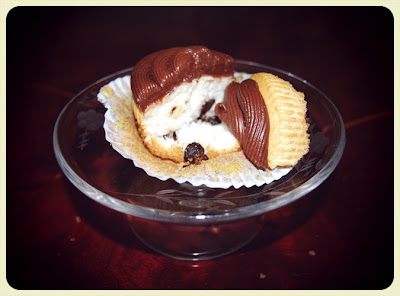 (In case you missed it, that was my awesome segue. See how I'm all smooth and natural-like)

Number 71 on my list is to bake 20 different flavours of cupcakes. So this is number 1. I will admit it’s not my finest work...and definitely not worthy of Cupcake Domination. Don’t get me wrong, they tasted great...but it was a mix. I needed fast. So I threw chocolate chips into a white cake mix and frosted with store bought icing. I know, I know, I’m a fraud. But in my defense they were tasty and quick...which is what I was going for. But a little tip for those using store bought frosting...go easy on it, it’s very sweet.
I used way to much and we ended up scraping a fair bit off.
They next cupcakes on my list will be from scratch...I promise.
I’m thinking maybe something with Oreos, mmm Oreos.