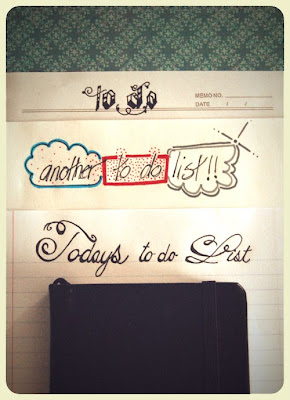 I have lists...lots of lists. I have a to do list for every room in our house, I have lists for sewing projects, painting ideas, birthday presents to buy and birthday presents to make. A perpetual Christmas gift list that I’m constantly adding things to and removing things from. I have cleaning lists, general to do lists,  shopping lists, wish lists, books to read lists, books to buy lists, things for Sam lists. Lists on my laptop, on receipts, in notebooks, on random scraps of paper...you get the idea.
I’m a serial lister, which isn’t a problem, I love making lists and they keep me organized, the problem is I never seem to do the things on the lists.
My "to do" lists look more like  "I didn't" lists. I really need to stop making lists and start doing the things on my lists.
So to help me with my obsession what do I do...

a site that encourages you to make a list...

Crazy right?
Lets fix my serial listing by making another list. Surprisingly it seems to be working. The idea is to make a list of 101 things you want to do in 1001 days. I joined July 23rd and I’ve already completed 3% of my list. I know it doesn’t seem like much but for me it’s big...I’ve had lists for years that never get anything checked off. I’m not sure if it’s the fact that I have a deadline to finish everything or the fact that my list is out there for the world to see, but whatever it is I’m finally getting things done...and I seem to be more motivated to get things done! Here’s my list, check it out...
my day zero list

One of the things on my list is to photograph and blog about everything I complete on my list...so be prepared for some random posts on random things. I’m hoping it will help me get in the habit of posting on a more regular basis, as well as helping me improve my photography skills...let me know how I’m doing!!

...where first you binge and then you purge.
Then you do it all over again.
So Sam spent most of yesterday alternating between eating, throwing up and screaming. 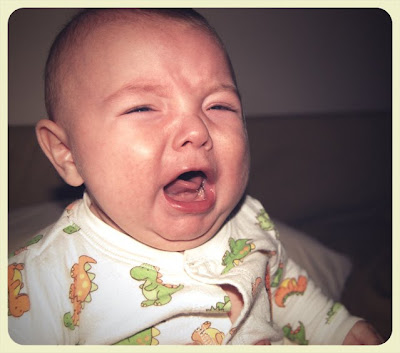 We had a very long day outside on Saturday and I think that contributed to his overall crankiness.
Our outdoor excursion started at 11:15 when we left to meet my Mom and check out Art On The Street... 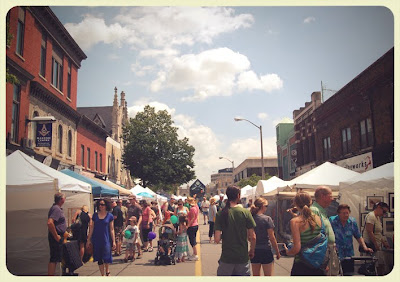 I wasn’t really impressed with the art this year. And if definitely felt weird being there and not having a booth. But I’m glad I decided not to apply this year...there’s no way I would have had enough time to put together enough new pieces to sell. Needless to say we weren’t there for very long.
We then traveled over to the Wooly for some lunch. 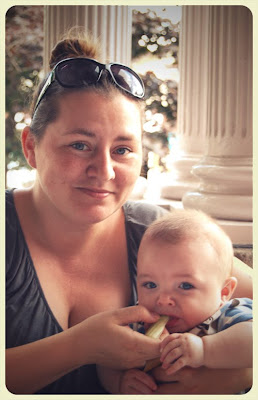 After lunch we decided to walk over to Nana’s for a visit but stopped on route at Mom and Dad’s new place to snap a few pics. 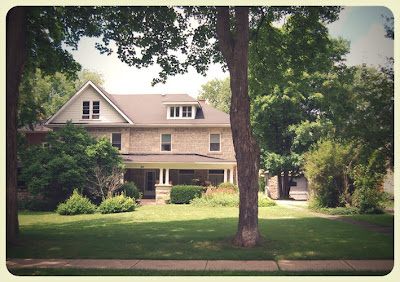 Can’t wait for them to move in!!
We finally made it to Nana’s where after some fish watching, Sam went swimming for the first time. 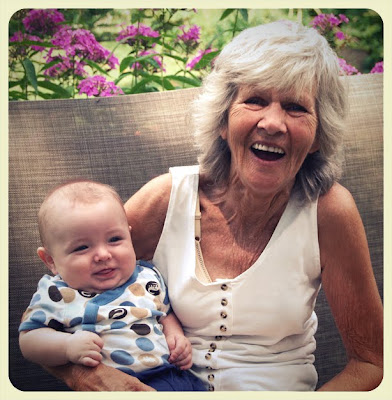 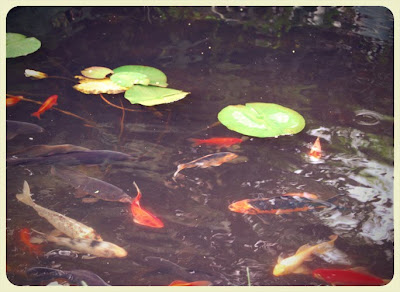 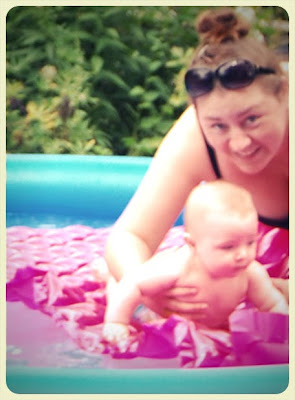 Not really sure how that went, he alternated between great big smiles and looks of sheer terror. We’ll try again another day.
By five o’clock we were more than ready to get home, so Mom walked with us down to the bus stop. Where we waited, and waited and waited some more. We finally decided to just walk home, despite the ominous thunder and black clouds. We made it home in an hour, with no rain, and that include a stop to chat with some friends that I hadn’t seen in months.
All in all a great day...long, but great. So although Sam wasn’t in the sun at all I think the heat was a little to much and that led to the cranky barfy baby that was Sam yesterday.
I had hoped to stay home and recoup...
(I wasn’t as smart as Sam staying out of the sun and now look like a partially boiled lobster),
but Mr. Snips had already told his mom we would come over for lunch.
We got lucky and Sam made it through a few hours without projectile vomiting...till we got home.
Then it started up again, the barfing and nonstop crying. So I decided it was time for a bath in hopes that it would calm him down and he’d go to sleep. 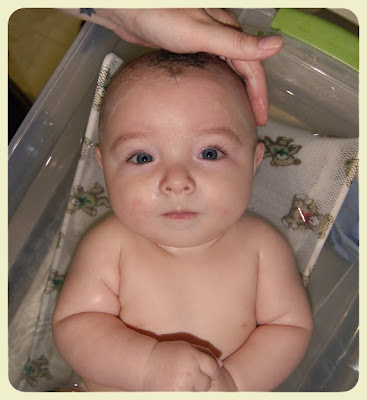 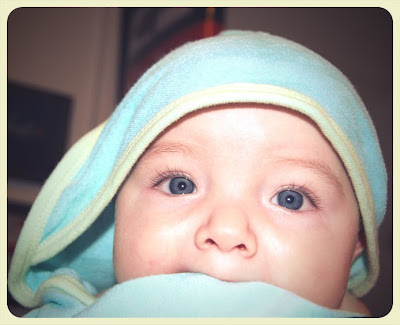 It Worked!!
For a few hours anyway...I nursed him and put him to bed, and he slept for a whole four hours. So I got two hours of sleep, before getting up to nurse him again.  Then got up an hour later to sing him back to sleep and an hour after that because a thunderstorm (that Sam slept through) woke me up. And an hour after that to nurse him again...you get the idea.
So now I look like a sleep deprived boiled lobster.
But it’s been a fairly good day today so far...touch wood.
Sam has closed the Vomitorium. 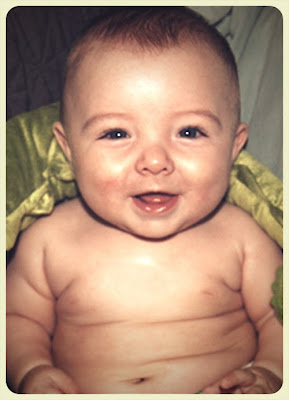 Mother of the Year


So although I’ve only been a mom for just over five months now, I’m expecting my mom of the year award any day now.

It all started last week... Sam and I moved in with my Mom and Dad for a few days when the thermostat reached almost 40̊ inside and my underwear started feeling like saran wrap.
We left Mr. Snips and Seven to fend for themselves while we retreated to the air conditioned comfort of my parents place.
Sam had been especially cranky from the combination of sticky, nasty heat and the joy that comes with teething. But within a few hours at my parents place he was feeling great!
I thought “perfect time to try him on some rice cereal.” So I mixed up a tiny little bit and gave it a shot... He did fantastic!
I was surprised at how well he did with a spoon, I was even more surprised when he held the spoon on his own and put it in his mouth.
“Remember at this point he was only five months old.”
I quickly turned to grab my camera to document this momentous display of wonderment when he jammed the spoon down his throat and immediately started choking.

Can we say Panic?!
If you can recall, I'm the Mom who cried for ten minutes when I accidentally scratched his head with my fingernail.
So after what seemed like an eternity of Sam coughing and gagging, “but in reality was probably only a couple seconds,” he stopped. Perfectly fine...and ready for more cereal.
Needless to say, I didn’t get the shot, but here’s one of him enjoying the cereal. 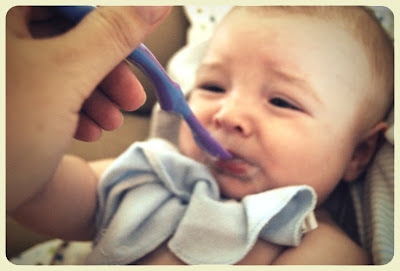 Then today I left Sam in his crib so I could tackle Mt. Laundry, and perhaps scratch some other things off my to do list. He was happy as a clam and naked as a jaybird...with the exception of his diaper. I learned the hard way to never leave him naked on his own. While I expect him to pee while naked, he seems to think it’s a great time to drop a load. He’ll go for two days without pooping then as soon as his diaper is off and I turn my back...blam!, poo everywhere!
But I digress, He’d been in his crib for about ten minutes since the last time I poked my head in to check on him. I was in the kitchen baking chocolate chip cookies, when I noticed how quiet things had got in his room. When I went in to check on him I found this... 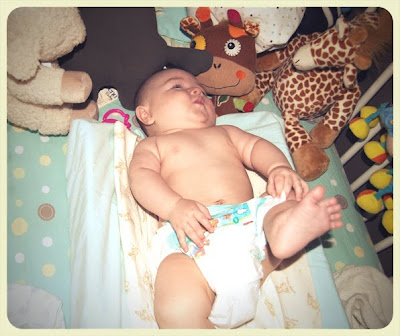 I use a change pad mattress in his crib to keep him from rolling over in his sleep and suffocating...(can we say paranoid). He’d managed to shuffle his way up to the top of the pad and had his head tilted off the pad and precariously close to the suffocating stuffed animals of doom at the top of his crib. (Note to self “remove all stuffed things and blankets from crib...stat.”) He’d also managed to get one side of his diaper undone, and we know what happens when his diaper comes off!

Then, just to prove my point, while writing this post I had him in front of me on the floor playing on his jungle gym mat, he decides it’s time to really show me how well he can roll over. So from his back he rolls onto his stomach and then he just kept on going...and quickly I might add. Right off the mat onto his back again and onto the uncarpeted floor, with a thump and a few tears.

My mother of the year trophy is in the mail right?
Posted by nicole at 8:00 PM 2 comments

So the quest continues, in this edition of WCD I tackle some super fantastic Dutch Chocolate Raspberry cupcakes.
Made for my Mom for her Un-Birthday today. ( I was in the hospital this year over her birthday.)
The cupcakes turned out quite good if I do say so myself, nice and moist and flavourful. With fresh raspberries inside!
Still trying to figure out how to keep the berries from sinking to the bottom of the cupcake while baking... any ideas?...
Anywho, keeping this short today but I promise I will try and post a little more regularly from now on...notice I said "try" 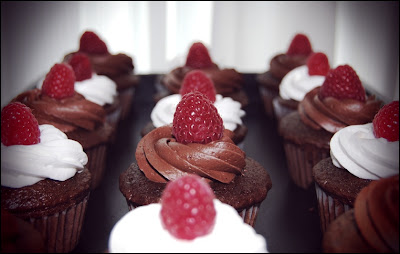 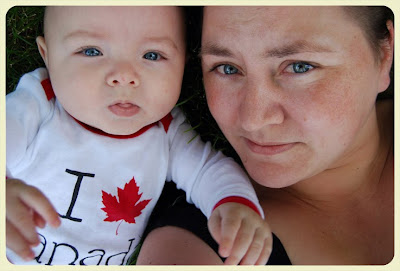 Just wanted to wish everyone a Happy Canada Day!!
I'll try and be back with a full post soon.
Posted by nicole at 7:45 PM 0 comments