I will be the first to admit that I’m an undomestic goddess. Yes I’m artistic and I can sew and I guess I’d say I’m crafty. But when it come to traditional household duties...I’m slightly lacking. And by slightly I really mean completely inept. I do clean the house, when I can. And by clean the house I really mean swiffer the floor and clean the toilet. I hate, hate, hate, doing the dishes. Some days they sit in the sink for a couple days, but they’re easier to scrape clean that way, right? Laundry?, I don’t really mind doing it anymore...now that I’m doing it every day. (Who knew such a small person could create so much laundry.) I don’t mind swiffering, but I hate dusting. And cooking, forget it. I can cook a mean grilled cheese sandwich and throw some fries on the side but that’s as good as it gets. During the day I live on granola bars and cereal, with the occasional salad thrown in for some greenery.
Mr. Snips cooks dinner, which works nicely for me. But I think about all the fantastic meals my parents cooked for me and my sisters growing up and I guess I hoped that some of those cooking and baking skills would have rubbed off on me.
Because I’ve decided that I want to become a cupcake master...
But I can't bake...
Witness my first cupcake disaster... 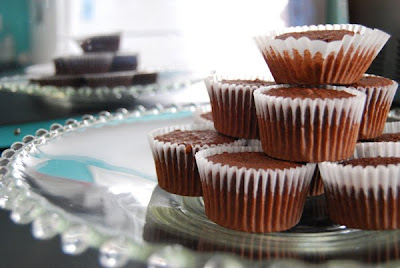 They look great...but who new that vegetable oil went bad?
Everyone?
Really?
Well I didn’t.
So the cupcakes looked great but you can’t even imagine how bad they tasted.
Mr. Snips said they tasted like the way a barn smells...whatever that means. Though I don’t think it was complimentary.
So my quest for world cupcake domination continues.
I made those cupcakes around the start of May, and I’d started thinking that with my shoddy baking skills I might be better off using my artistic abilities to decorate the cupcakes of others and leave the baking to more competent people. Then I got the crazy idea to try and make Black Forest Cupcakes for my Dad for Fathers Day...and they worked! Not only did they look awesome, they tasted pretty good too! 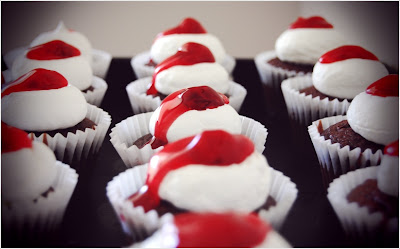 I guess there’s hope for world cupcake domination after all!
Posted by nicole at 12:11 AM