Then Christmas crept up on me, and for someone who makes all her gifts (and is a born procrastinator) there was no time for my little blog. “January” I said, I will start my blog in the New Year. It will be my resolution...
...January 6th my water broke, two and a half months early. There goes the blog again. I spent the next month on bed rest in a hospital in another city. So now I had interesting things to write about and all the time to do it and no internet access. Crap. 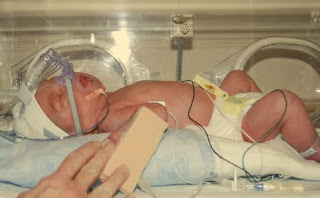 A month and a half  early. We spent the next week in the NICU then he was sent home to our hospital here for another week or so. We’ve been home for a while now and we’re slowly getting into a routine where I think I may be able to carve out some time to blog. I make no promises though. I would like to be able to post everyday but I’ll leave that up to Sam.

Now, I have a half hour free, do I write another post or have a nap?...maybe I should shower?
Posted by nicole at 5:58 PM